From Barnet to Bromley and Tower Hamlets to Twickenham, the third round of the Mayor of London’s crowdfunding programme has seen communities across the capital come together to transform their local areas. And last night twenty projects, including everything from restoring a lido in Peckham to a sustainable fish and chips truck in East London, came and pitched their brilliant ideas to a live crowd at London’s Living Room at City Hall. Meet all twenty brilliant projects here.

Each project had just two minutes (and mate, check out the timers on the screens, we were strict!) to sell their idea, what its impact would be and why it was important, before pressing our giant red button to find out the size of the pledge (up to £20,000) that they would receive from the Mayor of London.

Each of these projects was carefully selected from over 60 ideas put forward by community groups looking to play an active role in regenerating their local area. They form part of a larger programme that will see £1.3m invested in at least 80 community-led projects across the capital with thousands of Londoners expected to pledge more than £1m worth of additional crowdfunding, skills and resources to help make these projects happen.

With Sadiq Khan, the Mayor of London, pronouncing “Today I’m pledging support to an extraordinary range of local groups, for projects that will help strengthen their local communities, and make London an even greater city.” 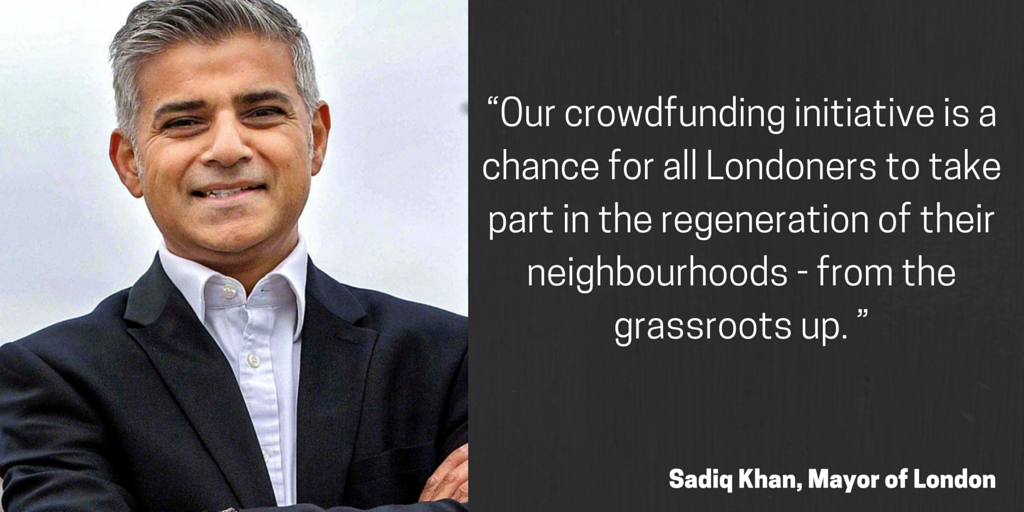 After receiving a pledge from the Mayor the projects now have just one month to complete their campaigns and since crowdfunding is an ‘all or nothing’ model these projects now need YOU to help make them happen. Last night alone we had 105 people in the audience contributing £5872 alongside the Mayor towards the projects highlighting the amazing catalytic effect of the Mayor’s pledge.

Wow!
You're all pledging tonight after @SadiqKhan's pledge! Keep it coming & lets do this!#CrowdfundLDN pic.twitter.com/wnJmyZakrV

Chris Gourlay, Founder of Spacehive, said; “This third round has shown crowds of citizens becoming real catalysts for change as communities come together to transform their local area. Receiving a pledge from the Mayor is fantastic as it helps activate an ecosystem of funding that includes individuals, companies, councils and other grant-makers, making it easier and faster for projects to hit their target.”

The Mayor pledged £225,000 to the twenty projects, who together have attracted over 2,000 backers and raised £333,111. See the full list of Mayoral pledges below and play your part in #CrowdfundLDN and back your favourite projects here.

The next round of the crowdfunding programme is kicking off in autumn 2016. Find out more and register your interest by visiting www.london.gov.uk/crowdfunding.